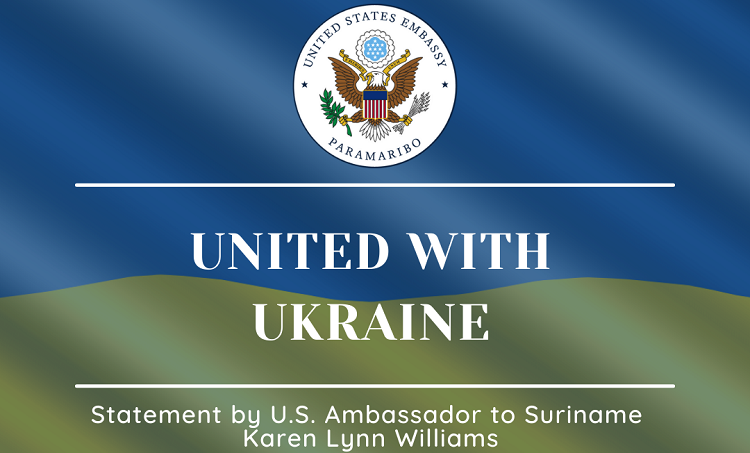 In this interconnected world, nations as well as individuals who value freedom and democracy form one global community which stands in horror at the devastating Russian invasion of the sovereign nation of Ukraine.  The United States, Suriname, CARICOM and the majority of governments and peoples in the world have publicly voiced condemnation of the ongoing assault.

Disinformation campaigns led by Russia globally and Vladimir Putin’s war on the truth and freedom in his own country have sought to obscure reality, but facts are facts.  Vladimir Putin planned this attack for a long time.  He methodically moved more than 150,000 troops and military equipment to Russia’s border with Ukraine, including blood supplies and field hospitals, claiming that they were on the move for exercises.  He rejected every good-faith effort by the United States and our allies and partners to address his fabricated security concerns ‘of de-nazifying Ukraine’.  He has criminalized the truth in Russia and he has tried to deceive the world with disinformation.  But we aren’t fooled.

The ramifications of the ongoing, violent aggression are being felt globally through its economic impacts, but also in the sinister implications of an authoritarian regime waging war on a sovereign nation and its civilian population, particularly if left unchecked.  The degree to which Mr. Putin successfully harms democracy will embolden other autocrats around the world to flex their muscles and look to exploit the current situation to their benefit.  We cannot let this be the beginning of the end of respect for the sovereign territory of neighbors.  Peaceful resolutions to territorial issues must be paramount.

This will not end well for Vladimir Putin.  Together, the United States and our Allies and partners are taking action to hold Russia accountable and leverage a halt to this war.  Along with the United Kingdom and European Union, the United States imposed sanctions on the architects of this war, including Putin himself.

Mr. Putin has failed to divide us, and has instead united the freedom-loving world.  He has failed to undermine our shared belief in the fundamental rights of sovereign nations to choose their destiny and their allies. And he will fail to erase the proud nation of Ukraine.

The longer Mr. Putin continues this war, however, the more he damages not only Russia, but the rest of the world.  This war has included attacks on cargo ships under the flag of noncombatants which has had a ripple effect across the shipping industry, particularly for food staples.  In Washington, DC and in countries around the world, governments, businesses and civil society are analyzing the impacts for their own society.  The Surinamese government and business leaders should be applauded for doing the same here and exploring ways to mitigate the economic pain.

The next few days, weeks, and months will be incredibly difficult for the people of Ukraine.  Putin has unleashed great suffering on them.  But the Ukrainian people have known 30 years of independence, and they have repeatedly shown they will not tolerate anyone who tries to take their country backwards.  The world is watching this conflict closely, and if Russian forces commit atrocities, the United States will explore all international mechanisms that could be used to bring those responsible – whether members of the military or their civilian leadership – to account.

Putin’s aggression against Ukraine is costing Russia profoundly, both economically and strategically.  The Russian people deserve better from their government than the immense cost to their future that this invasion has precipitated.  The people of Ukraine and Russia deserve peace and respect for their human rights.

Liberty, democracy, and human dignity are forces far more powerful than fear and oppression.  In the contest between democracy and autocracy, between sovereignty and subjugation, make no mistake:  Freedom will prevail.