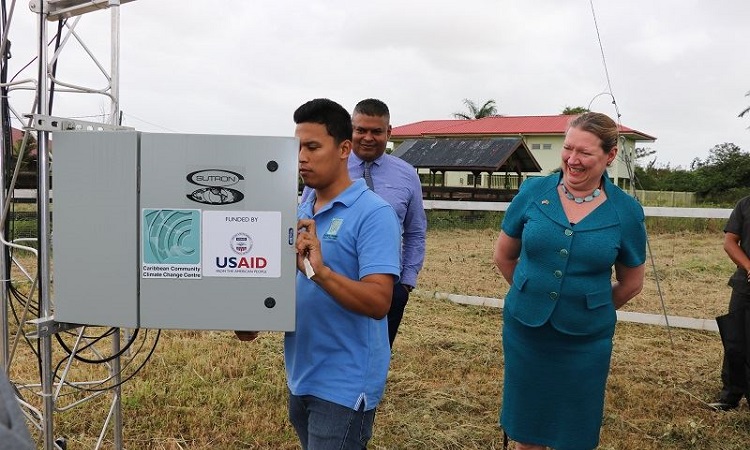 In keeping with efforts to strengthen the region’s capacity to mitigate the impact of natural hazards, on Tuesday, March 19, 2019 the United States government handed over 16 automatic weather stations to the Government of Suriname to be placed at strategic points across the country. This initiative is part of the U.S. Agency for International Development’s (USAID) three-year Climate Change Adaptation Project (CCAP) implemented in partnership with the Belize-based Caribbean Community Climate Change Centre (5Cs).

One of the key objectives of the US$10 million Project is to build the capacity of regional, national, and local partners to generate and use climate data for decision-making in government and beyond. A critical component is the procurement across the region of equipment including: coral reef early warning systems placed in the eastern Caribbean; a Light Image and Detection and Ranging (LIDAR) system housed in Belize for regional use;  and automatic weather stations and related data storage equipment.

U.S. Ambassador to Suriname, Karen L. Williams, formally handed over the equipment to Government of Suriname representatives during a brief ceremony. She told the gathering, given Suriname’s huge land mass, the use of these systems will significantly close the gap in nationwide coverage in data collection, and increase the country’s capacity to anticipate and manage the impact of changing weather patterns.

“As we all know, the region, including Suriname, has endured significant weather events over the past decade. I am particularly pleased that USAID, through its work with the our regional partner, the Caribbean Community Climate Change Center – which we all refer to as the 5Cs – has supported building the region’s adaptive capacity. Data produced from these systems will be used to make forecasts about future weather events, which will be important for planning in the agriculture; aquaculture, water resources, coastal zone management, tourism, and health sectors among others. For example, farmers will be able to access updated information which they can use to select crops and plan their planting cycles with greater certainty”, she explained.

Later this week, as part of the CCAP Project, the US government is also slated to hand over climate-related equipment to the Government of Guyana.