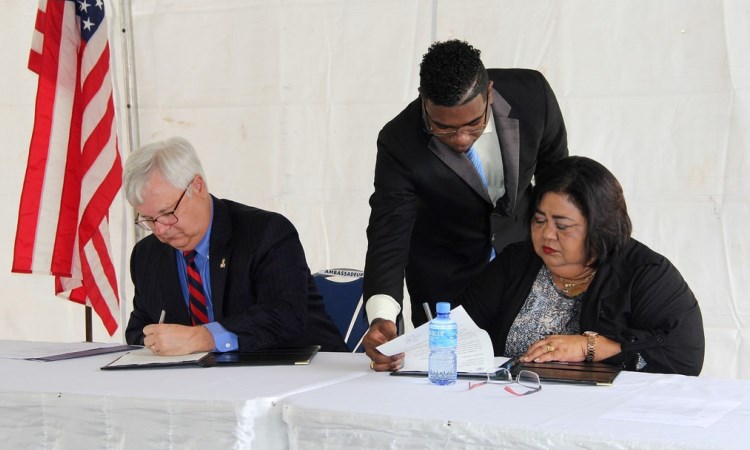 U.S. Ambassador Edwin Nolan and the Ministry of Justice and Police

The ceremony took place at the Marinetrap.

U.S. Ambassador Edwin Nolan handed the boats over to the Ministry of Justice and Police which, in turn, presented the boats to Police Chief Commissioner Agnes Daniel.

The two boats, additional equipment and services are intended for use by the Suriname Police Force (KPS) maritime units in Paramaribo and Nickerie. This donation is designed to support their efforts to combat all forms of illicit activity, and their performance of other duties within KPS jurisdiction on the Suriname and Corantijn Rivers and their direct offshoots.

This equipment is provided under the authority of a Letter of Agreement signed by the Ministry of Justice and Police and the Ambassador of the United States to Suriname.

During his remarks Ambassador Nolan stated: “This donation is a wonderful example of the continued collaboration and friendship between the governments and people of Suriname and the United States.  The success of our efforts to strengthen local law enforcement must be matched by a continued commitment to effective outreach to local communities, including those in remote areas.  My hope is that these boats will enable the Police Maritime Unit to carry out effective patrol operations, both around Paramaribo and along Suriname’s river border with Guyana.”

For more information contact the U.S. Embassy’s Public Affairs Section at the telephone numbers shown above or via email at paramaribopas@state.gov.