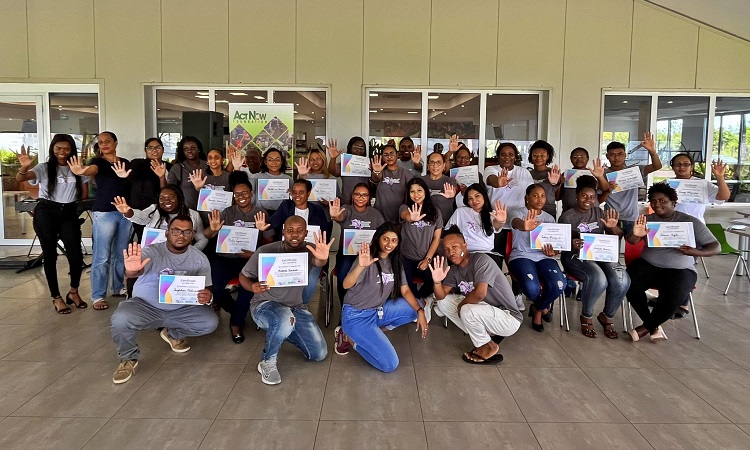 On Saturday, March 12, U.S. Ambassador to Suriname Karen Lynn Williams spoke to several dozen community leaders from around Suriname as they completed three months of training in the U.S. Embassy-funded “Together Against Violence” program.

During this first phase of a four-part “Together Against Violence” program, the community leaders attended virtual sessions that started in mid-December,  exploring the root causes of gender-based violence, how to identify potential victims, and how to support and talk to survivors.

“This is a critical topic,” Ambassador Williams told the gathering of about 40 participants. “Victims and potential victims of gender-based violence, domestic violence, need support, understanding, guidance, and active efforts aimed at prevention.”

Regionally, Suriname is among the top five countries with a high rate of domestic violence – especially violence against women, which has resulted in their deaths. The statistics have only worsened during the COVID-19 pandemic, which saw an increase in domestic violence across the Caribbean, with one of the greatest increases being in Suriname.

“This project is a first step among many that we are taking to address this issue,” Ambassador Williams said. “And as community leaders you are now challenged to take what you have learned and help others.”

The “Together Against Violence” program is being led by Priscilla Abhilakh Missier, co-founder of the Act Now Foundation and an alumna of the U.S. State Department’s International Visitor Leadership Program (IVLP). It is funded through the U.S. State Department’s competitive Alumni Engagement Innovation Fund, which supports alumni as they develop their leadership capacity and implement projects in their communities.

The four-part program will continue with school visits, the development of an app to connect potential victims and survivors with local resources, and the production of short documentaries allowing violence survivors to share their stories.

“When people get together and tell their stories it makes it real for everyone.  It is not just the facts and figures – it is the emotions and impact people feel on their lives.  And when they can tell it to another via video or in person – these are the actions and stories that do change hearts and minds,” Ambassador Williams told the community leaders during the concluding session.