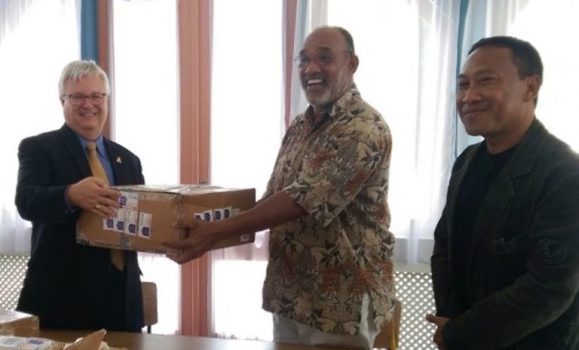 Ambassador Edwin R. Nolan handed over several boxes of artifacts to the board of the Jodensavanne Foundation

PARAMARIBO—On Tuesday, June 14, Ambassador Edwin R. Nolan handed over several boxes of artifacts to the board of the Jodensavanne Foundation and the Suriname Archaeological Service.  The artifacts date back to the 17th, 18th, and 19th centuries and include fragments of pottery, porcelain, and iron work that were uncovered by amateur archaeologists in the vicinity of Jodensavanne and Cassipora.  Director of Culture Stanley Sidoel and 2014-15 U.S. Fulbright Scholar and archaeologist Dr. Cheryl White were also present for the repatriation of the artifacts.

“I’m honored to be returning a piece of Suriname’s history to the Jodensavanne Foundation,” said Ambassador Nolan. “I’m sure the amateur archaeologist who uncovered them was as excited to see them as we are today.  However, there is a right way to go about removing culturally significant artifacts.  Without the proper scientific recording of materials from a site, it is impossible to reconstruct or understand the culture that produced it. The ultimate result is the loss of historical information.  It gives me great pleasure to return these temporarily lost items to their rightful place—here in Suriname.”

The items are believed to have been removed in the 1990s and eventually ended up in the hands of U.S. architect Rachel Frankel who recognized that these artifacts needed to be repatriated and contacted Harrold Sijlbing and Stephen Fokké at the Jodensavanne Foundation.

“When the Jodensavanne Foundation brought the matter to our attention, we were happy to help get the artifacts back from the United States to Suriname,” said Ambassador Nolan.

The objects will be reviewed and cataloged by the Archaeological Service and Suriname Museum.

“This will become an important reference collection to which future items uncovered at the site can be compared,” said Dr. White.