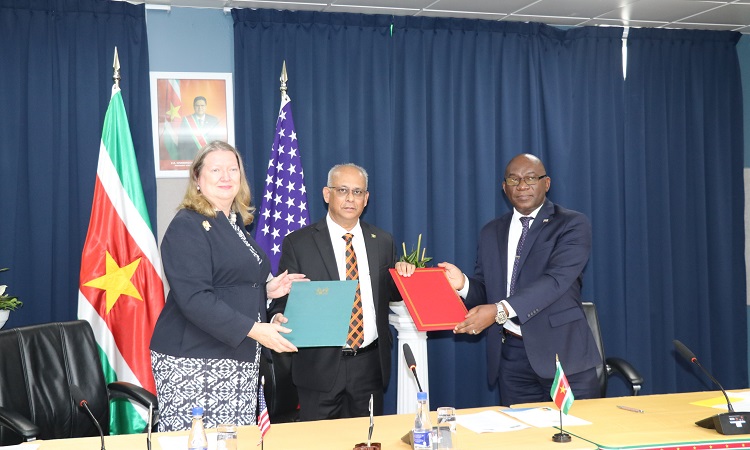 On Monday, October 31, the Government of the United States and the Government of Suriname affirmed commitments under a Letter of Agreement (LOA) to strengthen their cooperation in countering transnational organized crime and corruption.  The agreement provides the formal mechanism for the U.S. State Department’s Bureau of International Narcotics and Law Enforcement Affairs (INL) to broaden our law enforcement cooperation and promote transparency with the Government of Suriname.  This year, INL is providing US$300,000 for this effort through the Caribbean Basin Security Initiative (CBSI), highlighting the U.S. Embassy’s commitment to the Government of Suriname’s fight against crime and corruption. At a ceremony marking the occasion, U.S. Ambassador to Suriname Karen Lynn Williams, Minister of Foreign Affairs Ramdin and Minister of Justice and Police Amoksi  pledged to  enhance the capacity of Surinamese law enforcement and justice officials to investigate and prosecute criminal actors. Ambassador Williams recognized the Ministers’ cooperation with the U.S. Embassy on a wide range of security issues and emphasized the importance of strengthening the partnership to promote transparency and combat organized criminal actors in the region.