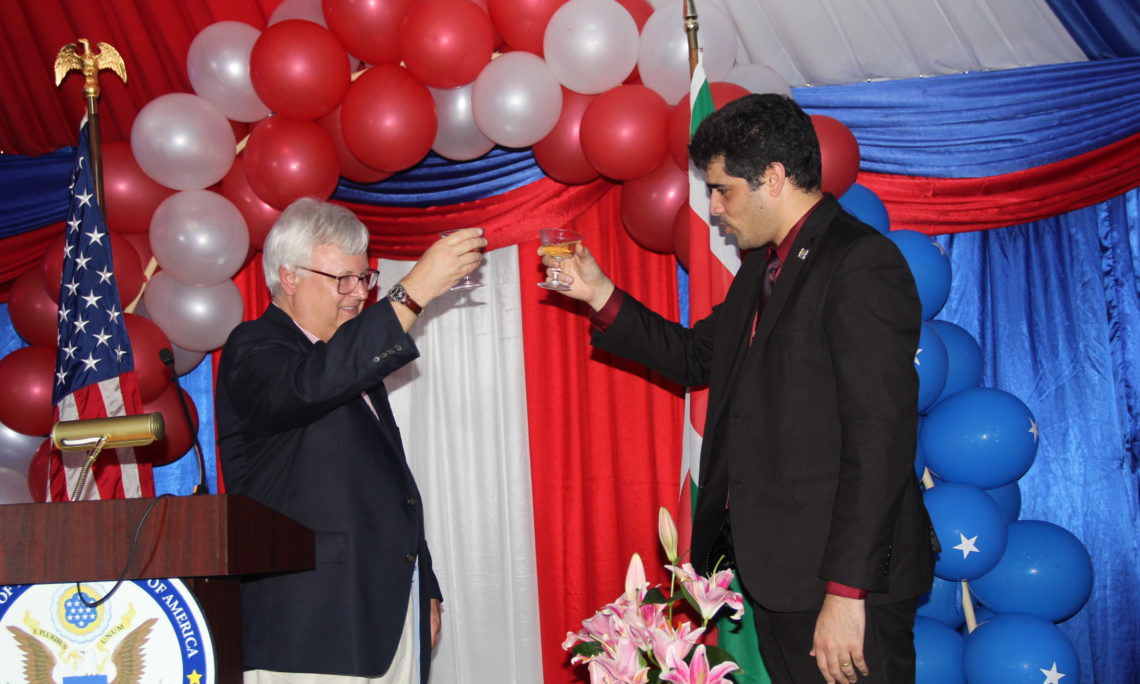 Ambassador Nolan and Acting President of the Republic of Suriname, His Excellency Michael Ashwin Adhin - photo by: Stet Dept

As the holy month of Ramadan continues, I wish all of our Muslim guests Ramadan Mubarak.

Tricia and I are pleased to welcome you to our home. We are also pleased to take this opportunity to introduce you to our part of the United States – New England.

New England is one of the most historic and culturally rich regions of the United States, comprising six states that formed part of the original American colonies:  Maine, New Hampshire, Vermont, Connecticut, Rhode Island, and my home state, Massachusetts, which at one time was known as “Taxachusetts” for its high tax rates, and as “the People’s Republic of Massachusetts” for its left-leaning politics.

The first settlers arrived in Massachusetts from England aboard the Mayflower in 1620 in search of religious freedom. By the late 18th century, the British colonies of New England were among the first to demonstrate ambitions of independence from the British Crown.  Perhaps these days we’d have called it “Amerexit.”

One of the most notable demonstrations was the Boston Tea Party of 1773.  The American Revolutionary war broke out in and around Boston shortly after in 1775 and the Declaration of Independence was signed and adopted by the Continental Congress in Philadelphia on July 4, 1776 – 240 years ago today. In the 19th Century, New England also played a fundamental role in the movement to abolish slavery.

New Englanders today are passionate about education, and you’ll see the pennants of several New England colleges and universities on the tables tonight, including my own alma mater, Boston College.  New England is home to Harvard and Yale universities. My hometown of Boston, with 50 colleges and 250,000 undergraduates in 50 square miles, truly is America’s College Town.

New Englanders are also passionate about food, and Tricia and I invite you all to get a taste tonight of authentic New England Clam Chowder, our famous Boston Baked Beans, and don’t forget the Whoopie Pies.

As many of you know, the United States has had a diplomatic post in Paramaribo for more than 225 years – since 1790 when we first opened a Consulate here. That was just 14 years into the history of the United States of America as an independent nation.  Our trade relations go back even further, as evidenced by the four New England ship captains whose final resting place is here in Paramaribo.

Suriname and the United States share a bond as nations of immigrants. Our countries were settled by enterprising colonists, built up through the labor of slaves from Africa and then later migrant workers from around the globe. Each of our nations chose independence and a democratic form of government. We have both weathered challenges to those democracies and experienced our own civil wars.

Our relationship began anew in 1975, when Suriname became an independent Republic and our Consulate became an Embassy. This year marks the 40th anniversary of diplomatic relations between the United States of America and the Republic of Suriname. Our first U.S. Ambassador to Suriname was Owen Zurhellen. Fourteen more, including me, have had the honor of serving in this beautiful country.

I believe that the United States and its friends and partners are seeking to advance universal principles – freedom, democracy, human rights, and economic well-being, among others.  In this era of history, the United States has been placed in a leadership role in advancing those principles, and I am proud to serve my country and represent it to the people of Suriname.

As Ambassador, it is my job to carry out President Barack Obama’s foreign policy priorities. In December 2014, President Obama announced we would restore diplomatic relations with Cuba, ending a decades-long freeze on formal ties. Last summer, we reopened embassies in each other’s capitals. Tonight, I am pleased to welcome my Cuban diplomatic colleague to our 4th of July celebration in Paramaribo for the first time.

President Obama has also made acting on climate change one of our top foreign policy priorities, recognizing the urgency with which we and our partners around the world must address the rise in global temperatures and the implications this has for our environment, our economies, and global stability. Last December, Suriname joined the United States and nearly 200 other countries in Paris to negotiate a historic climate agreement. And in April, Foreign Minister Badrising joined U.S. Secretary of State John Kerry and other world leaders in signing the Paris Agreement on Earth Day. We look forward to working with Suriname on this vital issue, critical to us and essential to the future well-being of our children.

In Suriname, and elsewhere in the hemisphere, expanded, shared economic opportunity is high on the agenda. In 2015, the United States exported $444 million in goods to Suriname. Exports from Suriname to the United States totaled $146 million. U.S. companies like Newmont, Apache, and Kosmos have made significant investments in Suriname in recent years. President Obama has repeatedly underscored the interconnectedness of the U.S. economic and commercial relationship with Western Hemisphere partners like Suriname and he affirms the U.S. commitment to shared economic prosperity among all countries in our region.

As we celebrate 240 years of independence tonight and 40 years of diplomatic relations with Suriname, nothing better represents the enduring friendship between our two nations than the new $165 million American embassy complex that is all but complete in Paramaribo North. If you’ve driven or walked by it on Kristalstraat or Kleinestraat lately, you can see the privacy wrap and the cranes are down, the building is up, and the palm trees and faya lobi are flourishing.

The new embassy is a model of sustainability and has been built with numerous green features, such as a green roof, insulation, and a water collection and filtration system.  It also incorporates recycled materials, such as siding made of compressed rice husks. Since we began construction nearly two years ago, more than 1,500 Surinamers have been hired to work on the project, applying their talents and learning the latest U.S. construction methods. We’re looking forward to welcoming you all to our new embassy in the fall.

As you know, it’s a presidential election year for us, and it is going to be an exciting and important one. We hope some of you will join us at the Embassy on election night in November to watch the returns.

Before we conclude our program tonight, I would like to especially thank the many sponsors that are making this night possible. Creating bonds with local Surinamese businesses, as well as Surinamese businesses representing American brands, is crucial as we deepen our relationship with Suriname. Thank you very much for your generosity.

I now invite Acting President Adhin to join Tricia and me in a toast:  To the Republic of Suriname and the United States of America, and—as it says in our Declaration of Independence—“to Life, Liberty, and the Pursuit of Happiness.”