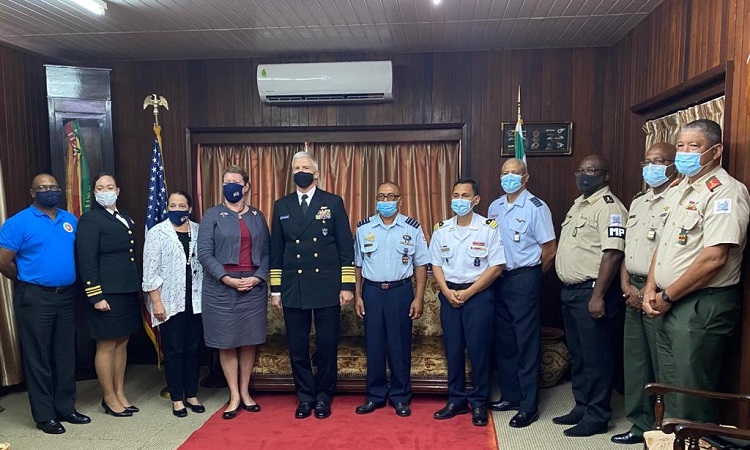 PARAMARIBO – Admiral Craig S. Faller, Commander of U.S. Southern Command, visited Suriname on January 13, 2021, deepening the already friendly military ties between the two nations.
During the visit, Admiral Faller had a working meeting with Surinamese President Chandrikapersad Santokhi, met with Minister of Defense Krishna Mathoera, and held discussions with the Commander of the Armed Forces and other heads of service branches.
In addition, Admiral Faller met with members of the Surinamese military who have participated in U.S. International Military Education and Training (IMET) exchange programs. Through the IMET program, Surinamese military leaders have been able to study in American military schools in order to improve their skills, develop their leadership abilities, and expand their professional networks.
During his meeting with President Santokhi, Admiral Faller also presented a $600,000 donation of four ventilators and 13 boxes of medical equipment and supplies. The equipment will be used by the Ministry of Health to care for Surinamese patients with Covid-19.
“I am reminded of the ties our countries share. In the Unites States, Suriname is considered an enduring partner – one with whom we share many defined values, like democracy, respect for the rule of law and human rights and a commitment to protecting the security of our shared neighborhood here in the Western Hemisphere,” Admiral Faller said following his meetings with President Santokhi.
As Commander of U.S. Southern Command, based in Miami, Admiral Faller oversees U.S. military operations in the western hemisphere. Suriname and the United States have a long history of military cooperation, these have included capacity-building exercises, disaster preparedness and humanitarian assistance, and projects to counter drug trafficking and illicit smuggling. Since 2006, the partnership between Suriname and the U.S. National Guard in the state of South Dakota has also allowed to skills and knowledge sharing between the two services