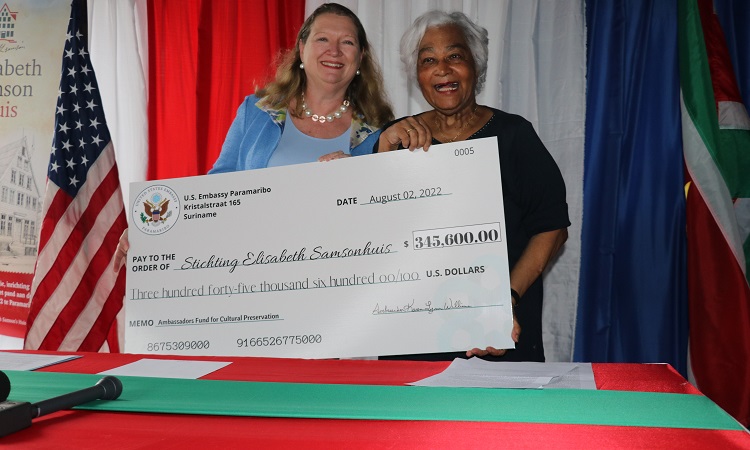 The United States Embassy in Paramaribo, Suriname is proud to announce that the U.S. Ambassadors Fund for Cultural Preservation (AFCP) has awarded Stichting Elisabeth Samsonhuis USD345,600 for the conservation of the Elisabeth Samson Mansion in Paramaribo. An award ceremony was held on August 2 on the grounds of the house located at Wagenwegstraat 20b.  U.S. Ambassador Karen Lynn Williams handed a symbolic cheque to Cynthia McLeod, president of the Stichting Elisabeth Samsonhuis, formally confirming the award.

The Department of State established the Ambassadors Fund for Cultural Preservation (AFCP) in 2000.  The program offers an opportunity for the United States to demonstrate its respect for world heritage and to promote historic and cultural preservation.  Since the program’s founding, embassies in more than 130 countries have partnered with foreign governments and non-governmental organizations to conduct more than 1,110 projects to preserve monuments, collections, and intangible heritage.

This year twenty-eight (28) cultural heritage preservation projects around the world were selected for funding through the AFCP Grants Program.  The award to Suriname is the largest in all South America and the Caribbean, and one of the largest worldwide.

Elisabeth Samson, the first black female millionaire in the Americas, built her residence around 1742 and lived there for nearly 20 years.  The Stichting Elisabeth Samsonhuis bought the property from the Government of Suriname on January 19, 2021, with funds donated by the Dutch National Postcode Lottery.  The Foundation is restoring the building, which will house the Elisabeth Samson Museum, a multi-functional hall, an outdoor stage, and rentable office space. The restoration of the Elisabeth Samsonhuis will start at the end of September 2022 and is scheduled to finish in May 2023.

As Ambassador Williams noted in her remarks “This project has deep meaning for Suriname, and the United States is proud to be a part of bringing Elisabeth Samson’s story to new audiences.”