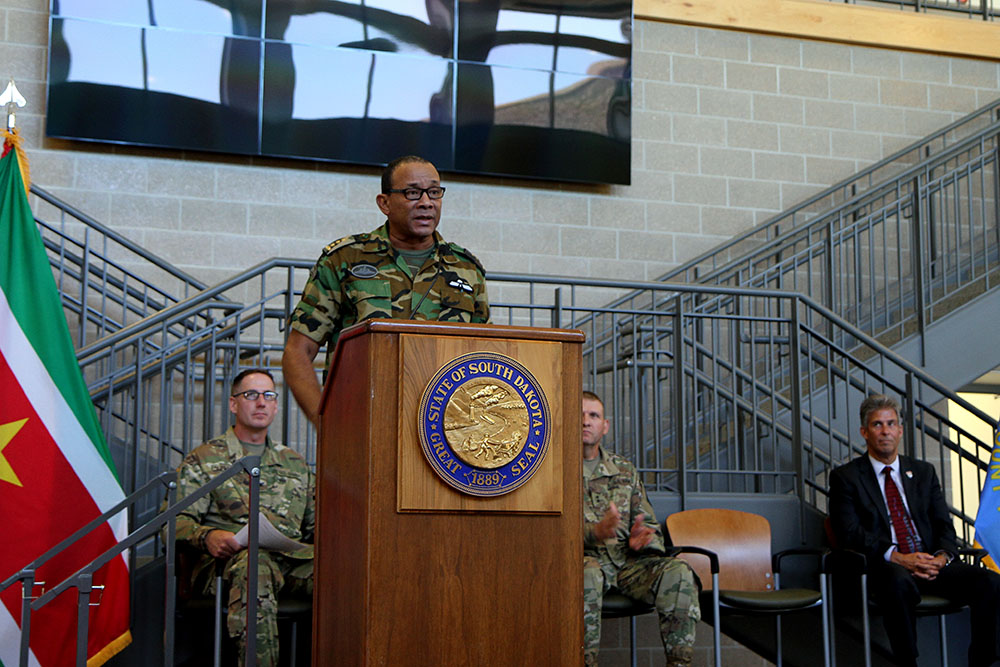 RAPID CITY, S.D. – Members of the South Dakota National Guard and Suriname Defense Force celebrated 10 years of partnership as they gathered together to attend an anniversary ceremony at Joint Force Headquarters on Camp Rapid, June 22.

The event recognized the 10th anniversary of the formation of the State Partnership Program between Suriname and the SDNG.

“The objective of the program is to connect as many people as possible,” said retired Col. Tracy Settle, the first SDNG director of the SPP. “This promotes relationships, which allows us to assess how we can work together to better our organizations.”

Since the trust-building process began in 2006, Soldiers from both countries have had the opportunity to visit each others’ homelands to gain knowledge and experience in both military operations and civilian culture.

“The skills learned by service members, both in South Dakota and Suriname, have been invaluable,” said Maj. Gen. Tim Reisch, the adjutant general of the SDNG. “This partnership provides the best venue to experience working with a foreign partner.”

Col. Adolf Jardim, Suriname Defense Force deputy commander, said both military forces benefit when subject matter experts from each country are able to share their knowledge on military topics, such as training in a jungle environment and building relations with local communities.

Suriname and the SDNG conduct about 10 subject matter expert exchanges a year on a variety of military related topics to include: field leadership and NCO development, logistics operations, military police crowd control training and procedures, medical and communications training, and women serving in the military seminars, to name a few.

Every year, hundreds of individuals from the SDNG, SDF, U.S. State Department and USSOUTHCOM directly participate with the experts during the exchanges.

Several days prior to the ceremony, Jardim and other officials from the SDF had the opportunity to observe various units working on projects and training being conducted during the 32nd annual Golden Coyote training exercise.

Jardim said the exercise and yearly exchanges help to facilitate new ideas and ways of expanding the partnership into the future.

“I’m looking forward to the upcoming discussions that we will have during the strategic planning event next year,” said Jardim. “I hope we can strengthen our relationship and expand our activities.”

While the ceremony was short, the relationship between the SDNG and Suriname will continue to grow for many years to come.

“Ultimately, the intent of the program is to foster peace and it starts with relationships,” said Col. Mike Oster, current SDNG SPP director.