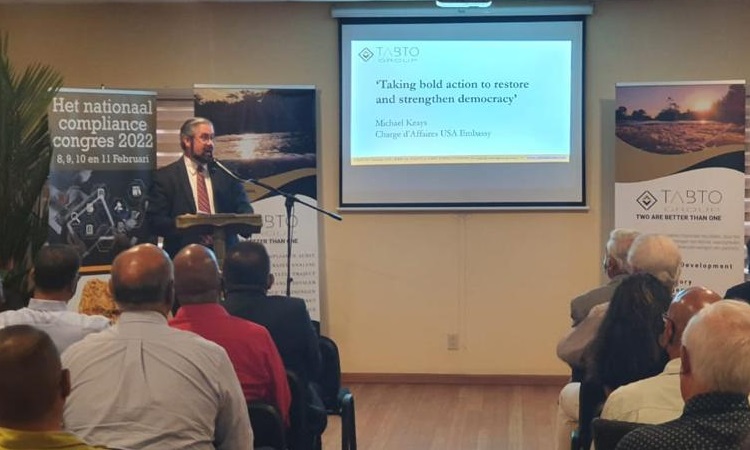 Ms. Wong Tham Soeng: Thank you for the kind introduction.

Defense Minister Mathoera, Former Attorney General Baidjnath Panday, Professor Diekman, Ladies and Gentlemen: On behalf of Ambassador Karen Lynn Williams who cannot be with us tonight, it is my pleasure to join you for this discussion. It is an honor to be with you as representatives of the leading sectors of Suriname’s economy. You are the lifeblood of Suriname, so it is a special honor to speak to you gathered here. Our thanks to TABTO Group for their continuing efforts to advance the important issues we will discuss tonight and in the days ahead. As their name suggests, and as we have heard, two heads are better than one in tackling these issues. Having public and private sector representatives here is the right approach.

In my remarks, I would like to briefly touch on the link between democracy and the fight against corruption, and why we must work together to take bold action to strengthen democracy. So, I am scoping back to the 50,000-foot level, to look strategically at the challenge facing Suriname.

Democracy is more than election day. Democracy is a functioning, free civil society; a transparent and responsive government; and adherence to the rule of law – that is, the idea that the law applies to us equally, no matter our station in life. It is more than just a system of government. It is a culture or mindset that empowers the people who live in it to reach their full potential.

History shows that societies that respect these democratic norms are more stable, prosperous, and secure, and better equipped to confront global challenges. It is no secret why democracy, which flourished in the ancient Greek and Roman empires, is still with us today as the main form of government in Western civilization. It facilitated the rise of Western civilization and is key to its continuation.

But just as everything has its opposite, forces against democracy exist. Indeed, they are on the rise in our world. Though we increasingly see autocratic governments advance the falsehood that restricting citizens’ freedoms is the only way to ensure prosperity and security, nothing could be further from the truth.

Prosperity – investments, development – flow to freedom and competition. Security grows out of the rule of law. Predictability and transparency tie these states of existence together. People thrive in a society when they can plan based on likely outcomes and feel they can take calculated risks. The more members of a society who feel their country is secure and that playing by the rules yields success, the more stable, secure, and prosperous that society is and will be.

While we agree that democracy is vital to national development, we must acknowledge that all democracies, including ours in the U.S., face challenges. Protests, political clashes, cuttingly critical discussions of policy or politicians – all of these can make society feel chaotic and cause us to question if democracy is worth the trouble. It is participatory at both ends – at the input end, and at the execution end. This means there is a lot of debate, and some people – especially those not familiar with Western civilization – are uncomfortable with this idea. These people prefer order. They usually are the ones who want to give the orders, or who want to be told what to do.

When such thoughts arise, however, we must remember that a major strength of democratic societies is the potential for honest introspection, renewal, and reform. The preamble of the U.S. Constitution sets each American up for the potential benefits of change, by making it clear that we are committed to a continuous process of striving to make our union more perfect. This founding document which describes the organization of our government, makes it clear that the government derives its power from the people, and is there to serve them and help them to fulfill their potential as individuals and as a country.

The nature of humanity is such that it is a constant effort to push back illiberal, authoritarian forces within and without our societies. But I hope you would agree that democracy, while imperfect, is the strongest and most resilient form of government, for it aims to serve the people, not the other way around.

The weapons we have in our arsenal to defend democracy include the rule of law and transparency, which keep government officials accountable. And which, also make a society more attractive to investors and business, both from within and from without.

At the end of last year, President Biden held a virtual Summit for Democracy, attended by dozens of world leaders, including Suriname’s president. Such a gathering was an opportunity to openly discuss, engage, listen, and speak honestly about the challenges facing democracy within our countries. It allowed us to cooperatively build a foundation for democratic renewal, helping us work collectively to meet head on the unprecedented global challenges we face.

When we Westerners think about threats to democracy, the immediate thought that often comes to mind is one, two, or three particular countries that seek to bring us to our knees. That is a natural impulse, and not without reason. But honestly, one of the truly sinister global challenges is the threat posed by corruption. Last June, in one of his administration’s high-level National Security strategies, President Biden designated the fight against corruption as a core tenet of U.S. national security policy. President Biden tasked the government to review, modernize, coordinate, and better fight corruption and tackle illicit finance.

I mention this to highlight that the U.S. – a country that was a novelty at its founding and which has lasted almost 250 years with a history of liberal democracy and history of transparency – must continuously fight against corruption. So, I think it fitting to pause and applaud Suriname for doing the same. From the National Risk Assessment to discussions like tonight’s, it is clear Suriname stands as a partner in this fight against the forces of greed and chaos that would tear down freedom and democracy and deny each Surinamer and each American the God-given rights to life, liberty, and the pursuit of happiness.

As President Biden said in his National Security memorandum: “The United States will lead by example and in partnership with allies, civil society, and the private sector to fight the scourge of corruption. But this is a mission for the entire world.”  Thank you for your attention and for your commitment, by being here, to join in the fight against corruption and the strengthening of democracy. In doing so, each of you is making our world a better place in which the peoples of our countries can thrive and reach their full potential.