A 2015 American biographical drama film directed by Tom McCarthy and written by McCarthy and Josh Singer. The film follows The Boston Globe’s “Spotlight” team, the oldest continuously operating newspaper investigative journalist unit in the United States, and its investigation into cases of widespread and systemic child sex abuse in the Boston area by numerous Roman Catholic priests. It is based on a series of stories by the “Spotlight” team that earned The Globe the 2003 Pulitzer Prize for Public Service.

Please note that a maximum of four (4) tickets per person will be provided. 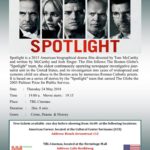