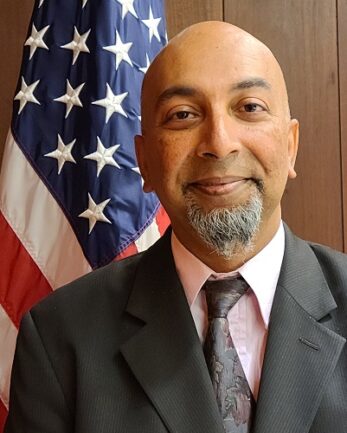 Priyadarshi “Pri” Sen has served as a Foreign Service Officer at the United States Department of State for over twenty years. Prior to his posting at US Embassy Paramaribo as Deputy Chief of Mission, Mr. Sen served at various postings abroad and domestically.  These included performing consular work at the US Consulate General in Tijuana and public diplomacy at US Embassy Panama.  Domestically, he covered management issues for US Embassies Minsk, Kyiv and Chisinau as well as the United States’ Mission to the United Nations in New York.  He also served as the Deputy Managing Director of the Innovation Directorate in the US Department of State’s Office of Management Policy, Rightsizing & Innovation.  Mr. Sen has led logistics operations at US Embassy Asuncion and finances at US Embassy Dhaka as well as serving as the Deputy in the Economic Section at US Embassy San Salvador. Directly prior to arriving in Paramaribo, Mr. Sen served as Management Counselor at US Consulate General Rio de Janeiro.

Before joining the United State Department of State Mr. Sen worked in the private sector for a government contractor in the Washington DC area.  He has also worked for the Census Bureau and at the US Congress and the White House.   Originally from Kolkata, India, Mr. Sen grew up in Texas and received his undergraduate degree in economics and mathematics from the University of Texas at Austin before receiving his law degree from the University of Michigan.  Mr. Sen speaks Bangla (Bengali), Spanish and Portuguese.  He is married with one daughter, two step-daughters, and a grandson.