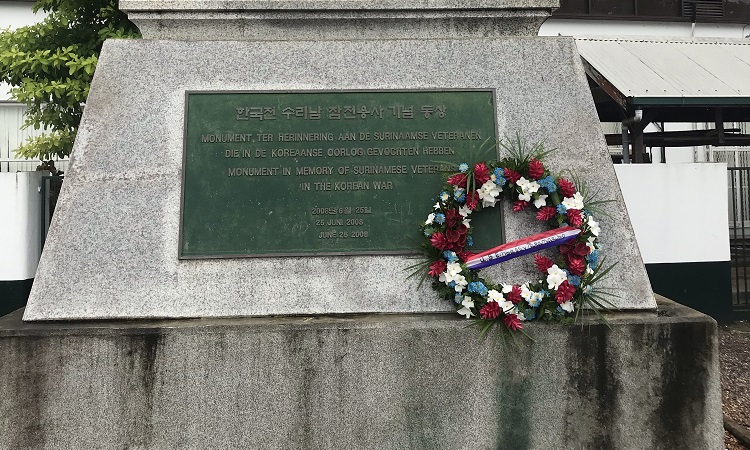 On June 25, 1950, 75,000 North Korean troops poured into South Korea, igniting the Korean War. The Security Council of the United Nations authorized the formation of the United Nations Command and the dispatch of forces to Korea to repel the invasion. Military personnel from around the world, including 115 Surinamese soldiers, (and my father, an 18-year-old U.S. Air Force airmen who was one of the 326,00 U.S. troops) found themselves far from home in a brutal war. Until fighting ended on July 27, 1953, the conflict would take nearly three million lives, mostly civilian. Wars should never be glorified, but the sacrifices made should be honored. The alliances forged, should be strengthened. When I look at the monument on the Waterkant, I see the alliances and the friendships as well as the sacrifices. I am proud to be the daughter of a Korean War veteran and I am proud to now serve in a country that sent their sons into that battle, two of whom paid the ultimate sacrifice.

The U.S./Republic of Korea Alliance has a motto “Katchi Kapshida! We Go Together!” – It is a motto I think fitting to all those who served in the U.N. forces including Suriname. It is an appropriate motto for any great endeavors upon which the U.S. and Suriname embark – whether the COVID-19 epidemic or other challenges – W’e Go Makandra!