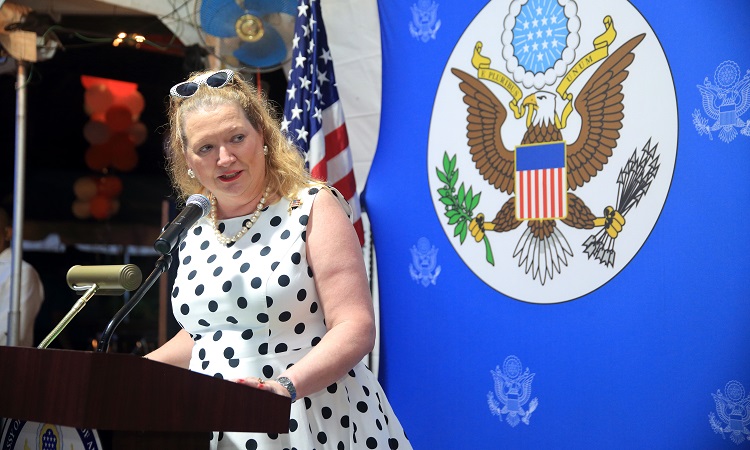 Your Excellency President Desire Delano Bouterse and First Lady Ingrid Bouterse,  — your presence is a great honor — distinguished ministers and officials of the Republic of Suriname; Members of the National Assembly; Fellow ambassadors and members of the Diplomatic Corps; distinguished guests, friends and colleagues:

Good evening and welcome to our celebration of the 243rd anniversary of the creation of the democratic nation of the United States of America.

As you have probably noticed by now, this year we have chosen to commemorate the fiftieth anniversary of the first landing on the moon, which took place on July 20, 1969.   I wanted to take a quick moment and thank the Embassy staff for their hard work to put this event together and to recognize the special effort that went into creating some of the very unique decorations you see around you.  The Embassy team has amazing skills and imagination.  I’d also like to thank our many sponsors – listed in full on the placards around the area —  who made it possible for us to come together tonight.

To date, only a dozen men – all U.S. astronauts – have ever walked on the moon.  The program became a cultural benchmark. It also became a spark for creativity and innovation.  On the posters inside the house, you can see some of the impacts of the moon landings and the space program overall on the daily lives of people around the world.

And now, the United States is in the planning stages to get back to the moon.  This time, though, NASA is going to the Moon with commercial and international partners to explore faster and explore more together.  This work will bring new knowledge and opportunities and inspire the next generation.  The idea is to go to the Moon – and to stay there.  To create a support and supply station by 2028, and to lay the foundation for a future mission to Mars.  The Moon will provide a proving ground to test technologies and resources that will take humans to Mars and beyond, including building a sustainable, reusable architecture.

This is all part of implementing President Trump’s Space Policy Directive-1 to “lead an innovative and sustainable program of exploration with commercial and international partners to enable human expansion across the solar system.”

The new program will excite and motivate a new generation of young people around the world to be interested in innovation, science and technology, including I hope, here in Suriname.  There is certainly a spirit of innovation here already.  In just the eight months I have been here, I have already seen examples of smart, creative, socially conscious people in Suriname committed to innovation.

As I walked around the “March for the Oceans” exhibits on the waterkant a few weeks ago, I saw a diverse selection of thoughtful, sustainable, and biodegradable products.  Items like bamboo and reed straws, shopping bags from banana plant fibers, to just name a few.  It’s exciting to think about the possibilities for Suriname’s future with such talented and motivated citizens.

Of course, innovative entrepreneurship is easiest when it occurs within a stable and secure economy that interacts easily with international financial systems.  It’s not as exciting as inventing sustainable products or flying to the moon, but things like financial systems that are resistant to money laundering are critical to any nation’s future since they can attract capital and investment from all over the world.  Here in Suriname, the United States is proud to be one of the principal donors supporting the National Risk Assessment that Ministry of Finance and the Central Bank are conducting with the facilitation of the InterAmerican Development Bank and the Organization of American States.  This is a huge undertaking – it’s not fun, unless you really love accounting and high stress – but it’s important.

It is also a good illustration of the partnership between the U.S. and Suriname.  The projects we do together are not chosen for their public relations value but for what long-term value they can add to the future of Suriname and to our mutual objectives.  Since last year’s Independence Day celebrations, together we have launched or completed projects that include computerized reporting systems and bicycles for the police, meteorological stations across the country, and enhanced aviation agreements.  We also sent seventeen young Surinamese students to different cities around the United States, as well as five young entrepreneurs and nine mid-level professionals from a wide array of backgrounds.  And we’ll be sending many more in the year to come.

I have also seen an uptick in interest from U.S. companies who would like to do business here.  And while U.S. commercial ventures are interested in making money, they also bring something important – a commitment to giving back to the countries in which they work.  I think you can clearly see this demonstrated in the exceptional projects U.S. companies are carrying out in Suriname in the field of corporate social responsibility.  When the private sector, public sector, and the diplomatic sector join together and work together, the results can be amazing.

Speaking of the diplomatic community, I just want to take a moment to recognize my fellow diplomats present.  You are, by far, the most welcoming and friendly community I have experienced.  Thank you for your fellowship.

By the same token, Mr. President, I must commend to you your own diplomats at the Ministry of Foreign Affairs.  Foreign Minister Pollack-Beighle and her team, many of whom are here tonight, are national treasures.  They are smart, efficient, competent, and, possessors of wonderful senses of humor.  It is a joy working with them.

In closing, I’d just like to take us back to the lunar landing anniversary again.  Everyone who was alive then with access to a TV can remember watching the broadcast of Neil Armstrong walking on the moon.  My whole family was mesmerized.  At that moment, my heart’s desire was to be an astronaut.  I can’t say that I was dedicated to any single career path at that age since I also wanted badly to be an opera singer and Wonder Woman, but still, if a job as a diplomat on a moonbase opens up in a few years, I’ll be first in line.

I hope our creative re-interpretation of the launch and landing has brought some joy and inspiration into each of your hearts this evening.  And though we’re remembering 1969, the real message this evening is about the future, and that what we achieve together today should serve to make a better world for all peoples tomorrow.  Thank you all for coming, enjoy your evening – and Go U.S. Women’s Soccer – may you defeat The Netherlands on Sunday!

President Bouterse, please join me in a toast:

(translation:  A toast:  To the Republic of Suriname, the United States of America, and all our citizens.  Let us consider the sky as our limit for our mutual respect and cooperation.)