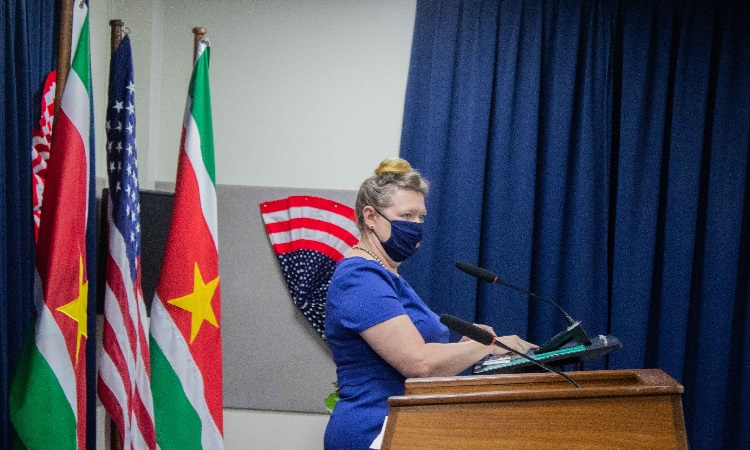 Marking 245 years of independence, in the United States, we gather to reflect on that decisive moment when our Founders declared our independence from the British Empire on the basis that its government was acting against a self-evident truth: “that all men are created equal, [and] that they are endowed by their Creator with certain unalienable Rights.” As one of our founding documents, we look to our Declaration of Independence as a reminder of where we come from, and a north star that guides our aspirations as Americans.

But, we know the lofty words of our Founders were not always lofty in practice. People of color, women, immigrants, those of different religions, members of the LGBT community, individuals with physical or mental challenges have had to appeal, argue, and sometimes even fight for full implementation of that fundamental assertion that everyone is created equal. In the 1860s, we fought a Civil War to end slavery, but equality was still a dream for too, too many.

We saw this reality over the past year, as we were forced to confront social disparities revealed by the pandemic and issues with our law enforcement and justice system – brought into sharp focus by the killing of George Floyd.

This year, July 4th comes just a few weeks after the newest U.S. federal holiday: Juneteenth, a date that commemorates the final end of slavery in America in 1865. And, just a few days ago, Suriname’s own emancipation commemoration – Keti Koti. The proximity of these dates on our calendars is a reminder of the relationship and shared values that bind our nations and peoples.

Today we are reminded that even in the trials and hurdles of the last year, we saw the great achievements.

Secretary of State Pompeo’s visit in September, the first visit by a U.S. Secretary of State to Suriname as an independent nation, was a symbol of our deepening ties and close relationship. We’ve seen many other high-level visits, of course. Foreign Minister Ramdin has visited Washington several times, most recently for a discussion with the Deputy Secretary of State. These visits and meetings show our cooperation is growing.

Admiral Craig Faller, commander of U.S. Southern Command, also visited Suriname to discuss many cooperative efforts that have come to fruition in the last few months including joint exercises involving seaborne assets and tactical training for ground forces. These exercises are integral to strengthening the capabilities of Suriname’s defense forces and strengthening our partnership.

The Admiral also brought respirators and defibrillators, among other medical supplies valued at approximately $700,000 to support Suriname. Our COVID-19 aid was not limited to that one donation, but also included the Embassy providing PPE to Suriname’s schools, USAID donating more than $200,000 to support UNICEF and PAHO’s efforts here, and continued donations. In a few weeks, we will see the arrival of a mobile field hospital, fully equipped with 40 beds, two generators and cooling systems.

Our partnership with Suriname is not just security or humanitarian – it is also economic. We want to see Suriname develop commercially and gain economic stability. The Embassy is working diligently to showcase Suriname to U.S. businesses investors via virtual trade meetings and, when COVID permits, an on-the-ground trade mission later this year. The recent virtual session that Foreign Minister Ramdin joined to promote U.S. business interest in Suriname, with the U.S. Department of Commerce, for example, is just one of the many ways we are working to attract American investors to Suriname, to ensure joint prosperity.

The Embassy is supporting the next generation of Surinamese business leaders with training for women entrepreneurs, a business plan competition for youth, and monthly sessions for business owners to share best practices – countless efforts through which we ensure they have the tools and knowledge needed to thrive.

The push for prosperity comes with an effort to curtail international crime, another area in which we’ve seen success. We provided cyber analysis training to police, security, and military officials to help fight cybercrime. We’ve helped Suriname via UNODC to bolster the security of the ports, and increased cooperation with the U.S. Drug Enforcement Administration. And we are wrapping up a multi-year anti-money laundering effort which led to the drafting of Suriname’s National Risk Assessment.

All this is just a fraction of our work over the past year – a bi-national team effort across multiple disciplines towards the same goal: two economically healthy, vibrantly diverse nations taking full advantage of our shared commitment to equality and democracy.