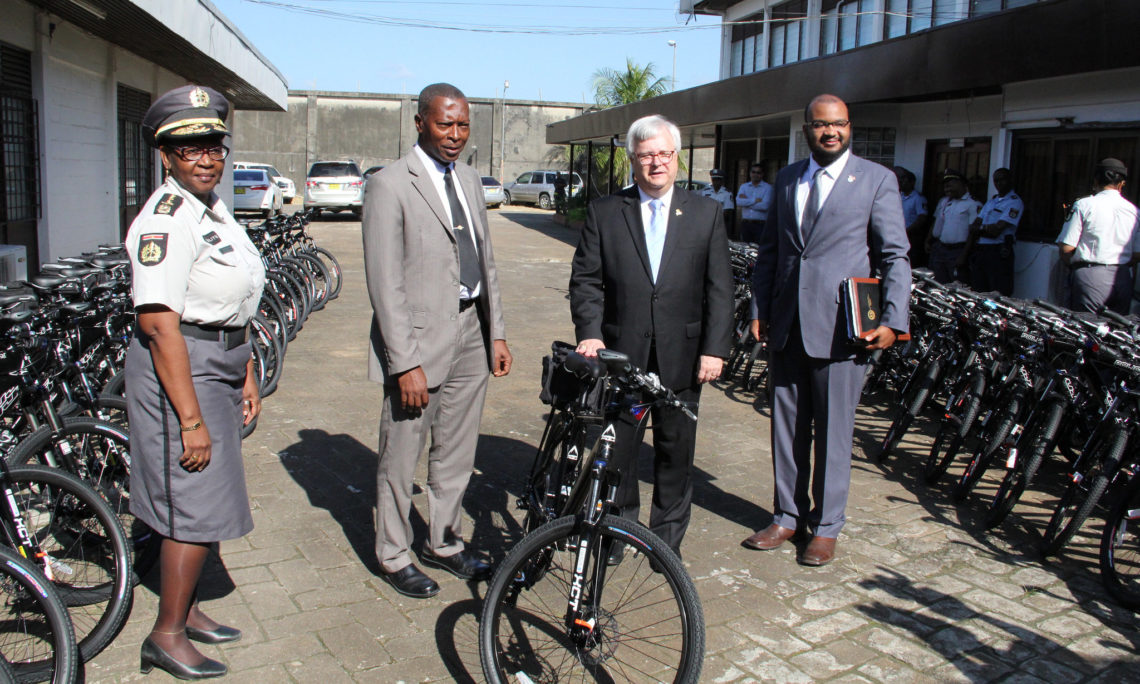 PARAMARIBO – U.S. Ambassador Edwin Nolan made a donation of 50 mountain bikes, along with 50 sets of gloves/helmets/bags/beacons, 50 sets of polarized eyewear, 50 sets of handcuffs and other items to the Korps Politie Suriname on Friday morning. The donation was funded through the U.S. State Department’s Bureau of International Narcotics and Law Enforcement Affairs (INL).

The Ambassador handed over the donation to Humphrey Tjin Liep Shie, Permanent Secretary of the Ministry of Justice and Police, who in turn turned it over to Agnes Daniel, Commissioner of the Korps Politie Suriname. According to the Ambassador the gesture is to support KPS’s community policing capabilities.  This donation is part of the broader commitment to stronger regional security cooperation through the Caribbean Basin Security Initiative.

Permanent Secretary Tjin Liep Shie mentioned that this donation is very welcome. He stated that the community will benefit from it and that police using bicycles will be more visible and will result in a fall of the crime rate. He also mentioned the long standing relationship between the Ministry of Justice and Police and the U.S. Government through different programs.

Since the inception of the Caribbean Basin Security Initiative in 2010, the United States and Suriname have enjoyed the mutual benefits of many successful programs which form part of this extraordinary partnership between the United States and the Caribbean.  This partnership, like all successful partnerships, is rooted in trust – trust in the goodwill of all partners and a belief that we share common values and purposes that can be better advanced by working together.